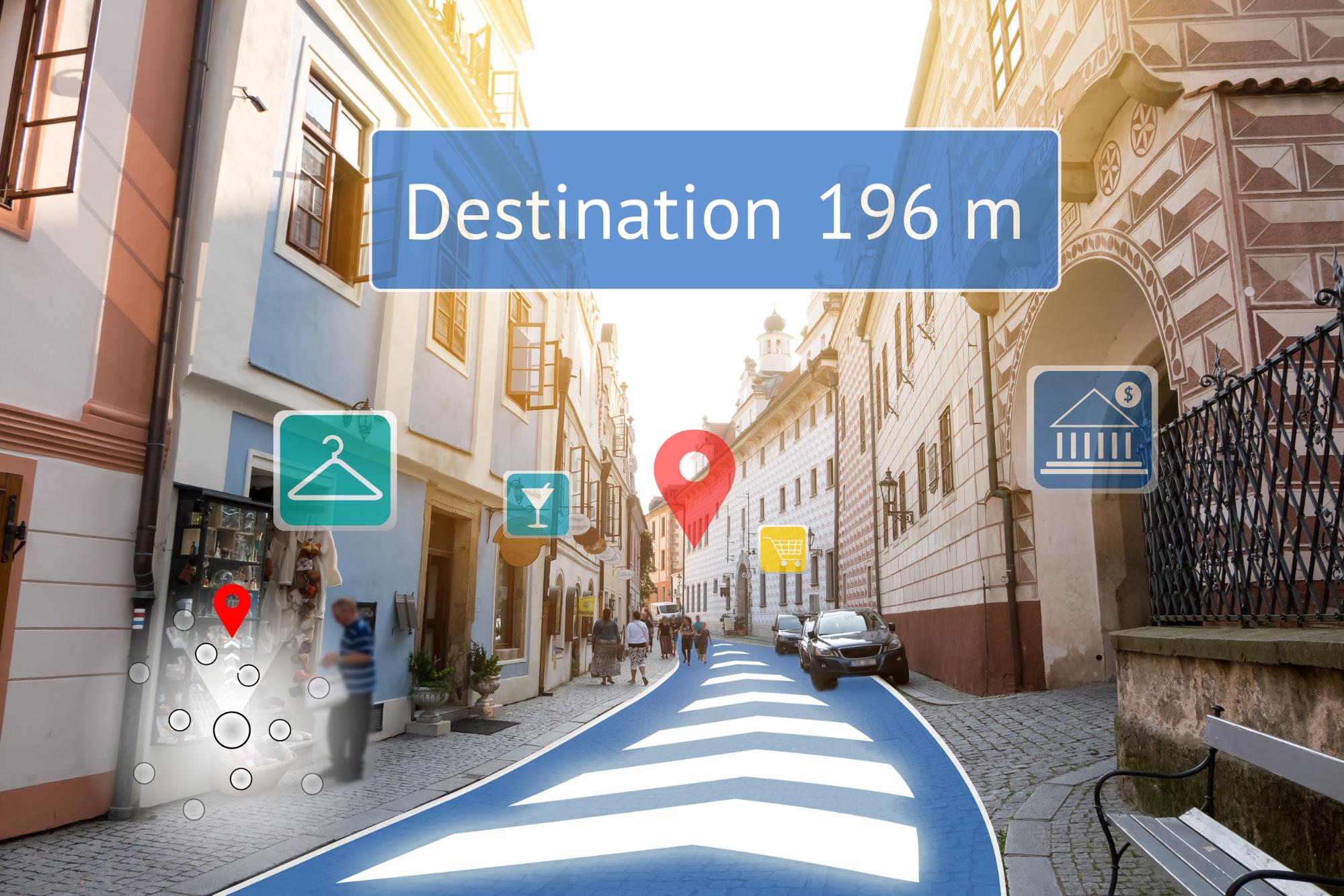 We have been waiting for so long and it has paid off:

It is only quite recently, that we were enthusiastically watching the characters of Terminator, Avatar and other sci-fi movies smartly playing with the objects of real and virtual reality. At that moment it all seemed - at the best case, the dim and distant future.

The future has turned out to be not so distant, after all.

The term "augmented reality" appeared in 1990. And it means the real-time possibility to supplement the existing reality with various virtual objects (arrows, text, images of people and animals, objects) using special equipment.

First, the technology was used, mainly, in the movie industry and games. For example, when both cartoon and real characters appeared simultaneously in one frame. You do remember charming Roger Rabbit, don’t you?

But all that required special equipment to be implemented:

With all this, we unconsciously got used to the technology, and started to believe that once everyone will have an opportunity to "decorate" or expand their own reality.

Finally, here we are:

In addition to other advantages, much and enthusiastically spoken and written about, this operating system includes a new ARKit framework.

This makes it easier and faster to develop augmented reality apps.

YOU MAY ASK, IN WHAT WAY IT REFERS TO ORDINARY USERS

Right you are, when you hold a phone in hands, you do not need to care about tools and procedures used to create it.

But, no doubt, you will find it exciting to find out what opportunities the new technology opens, what you can expect from it, and how to make an AR iPhone app using ARKit.

You will be amazed, how many users this makes!
And this will not be limited by the apps with Pokemons or similar.

The augmented reality technology offers wide opportunities in the most diverse areas:

No special foresight is required to realize, that in a very near future such apps will spring up like mushrooms after a spring rain.

If you find the language of figures more sound, please, be convinced:
According to Statista data and the forecast based thereof:

And this means, provided the forecasts are accurate, in the period from 2016 to 2021 we’ll witness the 35-fold increase in the market size!

Umbrella IT team just cannot (and does not want to) stay away from significant events like these. Don’t stay aside, either!

WHAT IS THE WAY IT WORKS IN PRACTICE?

The ARKit technology was introduced in a beta status this June. And we began to check in practice, what we can do with it and what results we can achieve.

So, we are holding our smartphone and can handle virtual objects by inserting them into the picture of reality.

To fulfill its functions, ARKit uses the camera of your device, its processor, and built-in motion sensors.

The complex system is applied to determine depth and horizontal planes. As a result, the virtual object is displayed correctly, that is, its proportions and overall perspective are compiled with. This is achieved due to the usage of two sensors: accelerometer and gyroscope.

Both sensors are designed to determine smartphone movement in the space.

Gyroscope sees the slope in relation to the earth. This means, when the smartphone understands, that you have turned it sidelong, and switches to horizontal content display - this is the gyroscope at work.

Accelerometer reacts to acceleration and defines movement in space. From its point of view, turning smartphone 90 degrees does not result in acceleration and movement. But, for example, the correct function of the pedometer in the smartphone is due to the accelerometer. As the gyroscope does identify the vibration and may accept it as steps, but cannot judge, whether we have moved or remain standing.

As a matter of fact, both sensors supplement each other and adjust the position of the object in relation to the smartphone motions.

This is only the shadow that gives away the virtual object on this picture taken by Umbrella IT.

In terms of technology, the position of virtual objects is calculated based on the depth of the scene and defined horizontal planes.

Although the idea itself is not new, to this date it has been very difficult to implement it technically due to a number of limitations and required third-party services to be connected.

So, what is Apple ARKit? ARKit is a native toolkit. It allows the developers to create impressive apps using Apple’s ARKit easily and quickly.

It takes no more than 2 hours for Umbrella IT team to create such demos with ARKit.

Inspired by new opportunities and motivated with new horizons, the developers are actively working on creating their own ARKit apps for existing iPhone devices and waiting for iPhone X. The virtual objects begin to "complement" the most diverse spheres of life.

Do you have any inspiring idea of ARKit app? It is high time to start with its implementation! Do not waste a chance - contact us right now!

Some of them are only at the idea stage, and some are already in use.

For example,
IKEA offers IKEA Place. The app is aimed to help you with arranging virtually the furniture in your flat/house and check the way it looks prior to purchasing it.

We need just to choose the furniture in the online-catalog and “arrange” it in the room exactly in the way, we are planning to put it in reality. And then...we watch it, consider, whether it matches with the interior environment, and choose. As simple as that.

Umbrella IT has tested IKEA Place app in one of its offices.

It would be unfair not to mention that Apple's competitors do not sit idle either.

Most recently, Google announced a release of ARCore - an ARKit analog for Android.

Microsoft develops its concept of HoloLens. It does not use a smartphone, but a special helmet and this makes the concept more expensive and narrowly focused.

IPHONE 8 (8 PLUS) AND IPHONE X AS A PLATFORM FOR BUILDING ARKIT APPS: WHAT WILL BE IMPROVED?

The processor presented in new iPhone devices is significantly more powerful, faster and more intelligent than its predecessors.

Now the new possibilities open in the field of the augmented reality apps.

It allows virtual models to respond even more realistically to any movement of a smartphone in the user's hands.

The video examples above show, that the models do not always accurately respond to the movement of the device, sometimes moving slightly in space relative to their original position. New hardware is aimed to exclude the issues.

Now, the perspective and the depth of an image will be determined better and faster. Due to this, the image will look more natural.

However, it will take some time before the devices confirm all these features in practice. But there is no reason not to trust Apple.

Now it covers almost the entire front side of the smartphone. So, it will contain a huge amount of content, while the device itself has quite moderate dimensions. That is, working with apps will be easier and more enjoyable.

Gorgeous color reproduction. TrueTone technology, that dynamically and very organically changes the color saturation and the temperature of the screen. This is very convenient for perception at different times of the day under different lighting conditions and is also good for eyes. We watch, play, study the world and have fun all at the same time!

In fact, it's not a single camera, but a whole block of sensors and detectors.

Perhaps, it will help to create 3D models of real objects and transmit them as virtual models into the scenes of the augmented reality.

As they say, let’s wait and see, but things do sound and look very exciting and impressive.

WHAT AWAITS THE DEVELOPERS?

Thanks to the machine learning and Core ML technology, the developers will be able to access a wide range of tools to recognize objects, texts, faces and much more. And it will work most efficiently in new iPhone models, which are already tailored for such apps.

For example,
Face ID is a new face scanner offered by Apple.
It is now on everyone’s lips, and much joked about.

The app should provide more intuitive unlocking of the device, and at the same time enhance security. Fooling such a system is almost impossible. The scanner works at any angle and even in total darkness (thanks to an infrared sensor). In addition, you may grow a beard, remove glasses, apply makeup, but it all will not trick the system.

The future of many industries, and especially of the app development, belongs to new technologies, and that is another story, loaded with specific details. Follow the information on our website and we will always keep you in the loop!