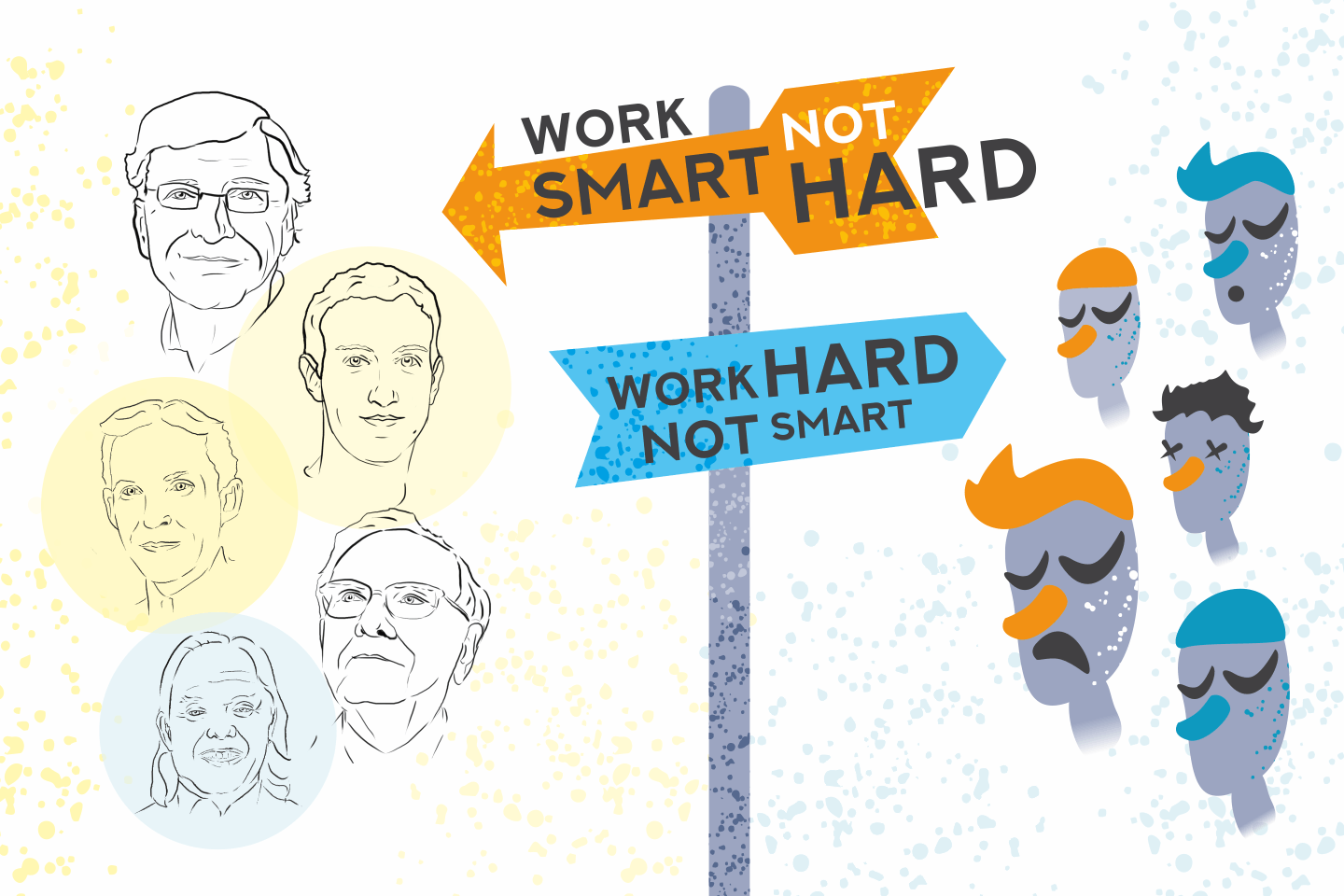 To achieve great things, you don’t have to "keep nose to the grindstone", this often doesn’t work and is simply harmful (both for your health and business). No matter what business you are in, you need to understand a simple truth:

Sometimes you can achieve maximum results with minimum energy.

We will tell you how the work smart not hard principle is applied by the example of successful and well-known businessmen and billionaires. There is so much to learn from each of them!

Bill Gates, one of the richest people in the world, is convinced that the most important is to find something you love to do and the sooner you do it, the better. Bill realized this truth when he was a child. Bill's passion soon developed into something large, and as a student of the 10th grade, he taught computer science to other people.

The secret of Bill Gates' success is that he has chosen his own path. Bill believes that it is necessary to create your own business and you can get the so-called "education" later. If you have a brilliant idea, never hesitate, act!

Being content with something that brings you no joy, sooner or later will lead to the life devoid of colors and your talent going into a coma.

Bill's individuality knew no bounds. He realized that if he lived like everyone else, innovations would never happen because all energy would be spent on adapting to the way you should be. Instead of wasting all his efforts on trying to love what someone else needs and working hard as everybody else, Bill has chosen the work smart not hard principle, investing his efforts and energy into fresh ideas and the future.

Bill decided not to waste his efforts. For Bill Gates, the years he could have spent to get a diploma would have really been a waste, in every sense of the word. Studies were too boring to him, moreover – they wasted his time, which he could put to better use - to excel in the area he loved most.

Apart from computers, since his childhood Bill has been interested in biographies of great men of history, trying to understand their thought process. It could be assumed that this partly contributed to his further success.

For Bill Gates, business is primarily an exciting and thrilling game, with minimal rules and virtually unlimited possibilities. The main thing is to believe in yourself and follow your passion!

Do what you like the most, and your favorite hobby will turn into your dream job that brings good profits. First of all, find your own path!

Over the years, the legendary founder of Facebook, Mark Zuckerberg carefully clears his life of any distractions. This helps Mark focus on what really matters.

Mark has his own approach to business - his priority is not maximum monetization, but maximum quality. Quality exists in Mark's personal life as well. He lives a very interesting and fulfilling life.

While adhering to minimalism in things, Mark Zuckerberg has never been limited to only programming, he is a very versatile person. During his student years, Mark was also interested in learning languages, mathematics and literature, and even fencing!

Surprisingly, after he became a head of Facebook, virtually nothing has changed - Mark still finds time for his favorite activities.

One of Mark’s key secrets is that, when he works, firstly, he singles out the essential task without being distracted by less significant things. Over the years, all this helps Mark Zuckerberg achieve excellent results, and his company is still a leader in the social network industry!

Today there are more than 2 billion Facebook users. Facebook also holds a leading position among social networks by the number of millionaires.

According to the study of the consulting company Spectrem Group, 59% of millionaires with a net profit between 1 and 5 million dollars are Facebook users. And in the age range of 35, their share is even higher and amounts to 81%.

Mark hardly ever gets tired, because he constantly combines work with other interesting things - sports and traveling, which is why he is always full of energy and fresh ideas. There are neither unnecessary things nor unnecessary people in his life.

The work smart not hard principle in Mark's life primarily is reflected in the ideal distribution of efforts between work and leisure. Moreover, work for Mark is similar to leisure activities - he constantly interchanges one activity with another.

Clear your life of ineffective, unnecessary and obsolete things. Do not waste your time, better focus on what really matters. Then, the work smart not hard principle will help you feel light and free and achieve abundance without any excessive efforts.

"Time is the friend of the wonderful company, the enemy of the mediocre"

Another example of a billionaire, who successfully lives by the work smart not hard principle, is the Wizard of Omaha, the world's largest investor often referred to as the Oracle. Of course, we are talking about Warren Buffett.

A path of a successful investor can be compared to a life cycle of a butterfly. One day a moment comes when the investor decides to stop and rethink all the work he has done, be inspired and continue his journey with new forces. Warren is convinced that for a truly successful investor sometimes even inaction may be better than feverish buying and selling.

"I will tell you how to become rich. Close the doors. Be fearful when others are greedy”

Warren believes that you need to be ready for your lucky chance. The wise investor knows how to wait for the right time. When warm spring days arrive, the butterfly leaves the cocoon, waits a moment until its wings get stronger, and then the most interesting thing happens - flight on the wings of success and sweet nectar of possibilities!

To achieve amazing results in the work hard not smart style, you don’t have to work yourself ragged; Warren also believes that you should not risk all you have chasing after desire, as this will lead to a downfall.

Do not be afraid of new opportunities like Henry Ford

Every person has only 24 hours a day, if you spend all your time just on production, then soon you are likely to be left far behind your competitors. You could spend this time on developing new products or improving existing ones.

Henry was convinced that in any business you could and should always learn to do something better than everyone else, you should look for creative solutions to your problems.

While most of Ford's competitors were covered in rust, preaching the "sell a car to the rich" principle, Ford courageously walked the thorny path of innovation, focusing on improving and maximally simplifying the production process through the latest technology. Thus, cars soon became more available, which led to a manifold increase in his profits.

"Be ready to revise any system, scrap any method, abandon any theory, if the success of the job requires it"

If Henry Ford acted ‘like everyone else’, it is quite possible that no one would have remembered him today, and his business would have withered like a flower dried up from the bright sun of his competitors’ success.

Henry did not just build a successful business, he made history! He introduced the standardization of car parts; as a result, the car production became easier. Following the work smart not hard principle, Henry made a real breakthrough - his revolutionary, fast and efficient car making conveyor allowed Ford to become a leader in the industry.

The work of Henry Ford himself was similar to a conveyor, but in this context, it didn’t mean a monotonous activity until you drop, on the contrary - Henry broke down complex tasks into simpler steps, which lead to impressive results!

Using of innovations will let your business soar like a crane over less successful competitors. New thinking will give you new opportunities, which is especially important in the age of information technologies.

From time to time, leave work like Michael Roach

"You fix your life, and your business, and your world by fixing yourself”

Certainly, one of the best examples of work in the work smart not hard style is Michael Roach.

Michael Roach is a truly amazing person who has managed to combine two apparently incompatible things - spiritual practice and financial enrichment. But, in fact, there is no contradiction. Michael Roach is a vivid example of the statement that business and Tibetan wisdom pursue the same goal - prosperity.

The history of this man is very unusual. His parents and brother died when he was a student, & Michael made a decision - went in search of himself. This led him to Tibet. Michael Roach spent 20 years as a monk in a Tibetan monastery.

Michael started his business thanks to his teacher, who gave him the task to start his own business and earn 1 million dollars within a year.

Tibetan wisdom has helped Michael achieve a tremendous success in the diamond industry. The company Andin International founded by him has become one of the world’s leaders among jewelry suppliers.

One of Michael's key secrets is the Circle principle (a variant of the work smart not hard principle). In his work, Michael strictly adhered to this principle for more than 15 years. The bottom line was that every Wednesday Michael did not go to work, completely stepping back from his duties in search of inspiration.

But Michael did not just "go to the Circle", he appointed a very strong assistant, delegating some of his powers to him. Thus, Michael was able to strengthen an administrative pool of his department, and each year his company prospered steadily, as if by magic.

Learn more about delegation in our article "Delegation and other secrets of success by the example of Steve Jobs and Elon Musk ".

For Michael Roach, the Circle days were a spiritual practice, time to plan and reflect. On such days, Michael thought about not how something happened at work, but why it happened. The Circle days were the time to acquire the impulse of inspiration and fresh ideas.

"If you work day and night, apparently, there is something you do not understand"

In conclusion, we would like to draw your attention to the following key points:

Take care of yourself! Work never ends, but your life, alas, is not infinite.

And following these tips, remember, the most important thing in any job is the ability to make wise decisions. Just replace all bad work with reasonable one. That's smart, not hard!